Randy Garcia, CEO of the Investment Counsel Company, is a strong supporter of veteran causes. He was inspired to organize and sponsor this event after visiting Normandy for the 75th anniversary of the Allied landing. 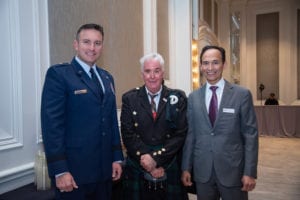 While he was in Europe, Randy traveled through France, Belgium and Germany. It was on his trip to commemorate the 75th anniversary of D Day that he met Martin King, the renowned WW II historian. He also met a decorated WW II veteran, and when Randy thanked the man for his service, that gentleman responded…

“Don’t thank me; I should be thanking you for not forgetting me.”

That’s why Garcia is inspired to continuously support our country’s veterans.

More than 300 people attended the March 9, 2020 event, held at the Four Seasons Resort. Attendees included veterans from WW II through the present, to hear the story of America’s longest land battle, the Battle of the Bulge. The Nellis Air Force Base Honor Guard, Cimarron High School JROTC, and leadership from the Boulder City Veterans Home were also present. Other guest speakers at the event were Brig. Gen. Robert Novotny, from Nellis Air Force Base; Ret. Brig. Gen. Gregory Ihde, and two-term Nevada Governor and U.S. Senator, Richard Bryan.

Along with hosting this event, Garcia has made contributions to the Nevada Veterans Assistance League and the Cimarron High School Air Force JROTC. 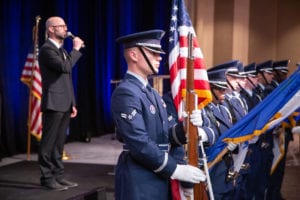 Martin King’s Telling of the Battle of the Bulge

The Battle of the Bulge was the largest and bloodiest single battle fought by the United States in World War II. King developed an admiration for the soldiers who fought there because he befriended so many who crossed the ocean to fight for our country. He speaks at military bases around the world and schools to share the veterans’ stories.

King thought that this history is an important part of America’s identity and should not be forgotten.

He made it a “labor of love” to speak to as many of these service men and women as he could, and immortalize their memories for future generations to reflect on and be inspired by.

“Many wouldn’t speak of their experiences to their families, but finally opened up to our researchers,” King said. “We want to keep these stories alive and circulating.”

When asked what inspired him, King said it was his grandfather, who served in the First World War.

“My granddad never spoke of his experiences in World War I,” King recalled. “One of his friends told me, however, ‘Your granddad was a great soldier. He was one of the few who terrified guys on both sides.’”

King has written 10 books and walked a lot of battlefields to get a sense of the people and places he was writing about. “I take away the experience of trying to walk in the footsteps and on the shoulders of giants,” King said.

Garcia recalls the day he met King in Belgium at the Battle of the Bulge battlefield; he reflects both on the service members who fought and on the writer who is telling their stories.

“I got to appreciate the great sacrifice that these great Americans made. All of my family were servicemen. My father, my uncles all proudly served in WWII.”

“It inspired me to learn more.”

Randy Garcia and Martin King shared with KNPR the story of Nevada’s World War II Veterans. You can listen to the interview
here.

Like what you’re reading? Sign up with your email address to receive notifications of our latest posts.